Showing posts from January, 2020
Show All

Book Review: The War on Normal People by Andrew Yang (2019) 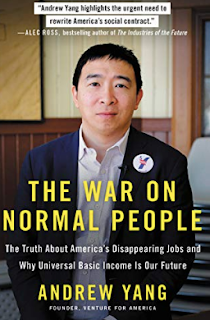 I just finished reading Andrew Yang's, ‘War on Normal People’ and I wanted to record my thoughts while they are still fresh in my head. So here it goes ... This book looks at the way in which the the rise of Artificial Intelligence (AI) over the 21st century  will affect the economy and the jobs of the people in it. A key theme is that if we leave our current capitalist system unchecked during this change, it is likely to end up with many people being left without jobs and massive disruption to the fabric of our society. The book serves as both a warning to society as well as an outline of the changes that need to be made, in order to adapt effectively. It’s written from the perspective of Andrew Yang, a once corporate lawyer and entrepreneur who started the Venture for America Initiative and is now running for the office of the president of the United States of America. Yang writes with a refreshing honesty and grit, from the perspective of someone who has been in the tr
Post a Comment
Read more
More posts